A season’s access into the dressing room with Eamon Dunphy

In his candid expose, Only A Game?, Eamon Dunphy gives a riveting, diary-style account of his last few months playing for the Millwall Football Club. 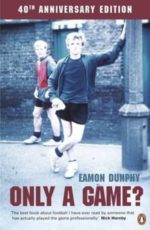 He writes from within the game, giving us a peek at the high dramas developing within a professional football club as it fights to reach the top echelons of the English football league.  Eamon Dunphy gives us a very genuine and very personal glimpse of what goes on inside a player’s head when facing defeats that are soul crushing and victories.

The season-long peek into Millwall Football Club’s dressing room, from the perspective of a football player, became a classic through the decades.  It had set the standards for a lot of the modern type of biographies that we are now getting, warts and all (the better ones, that is).

“Exceptional. It became the standard by which similar books were judged …” – The Times

Nick Hornby, writer of the Fever Pitch, cited Eamon Dunphy’s book as “The best book about football I have read by someone who has actually played the game…everyone who has ever dreamt of a sporting career should read it“.

Ironically, the acclaim of Only A Game? was only surpassed by Nick Hornby’s Fever Pitch over a decade later.

If you find my review on Only A Game? by Eamonn Dunphy brief, you’re welcome to comment below on how you found the book.  I promise to publish your review.

But brief though it may be (after all, it is a review snippet), I firmly assert that Eamon Dunphy’s book is an indispensable part of any sports section in your library.